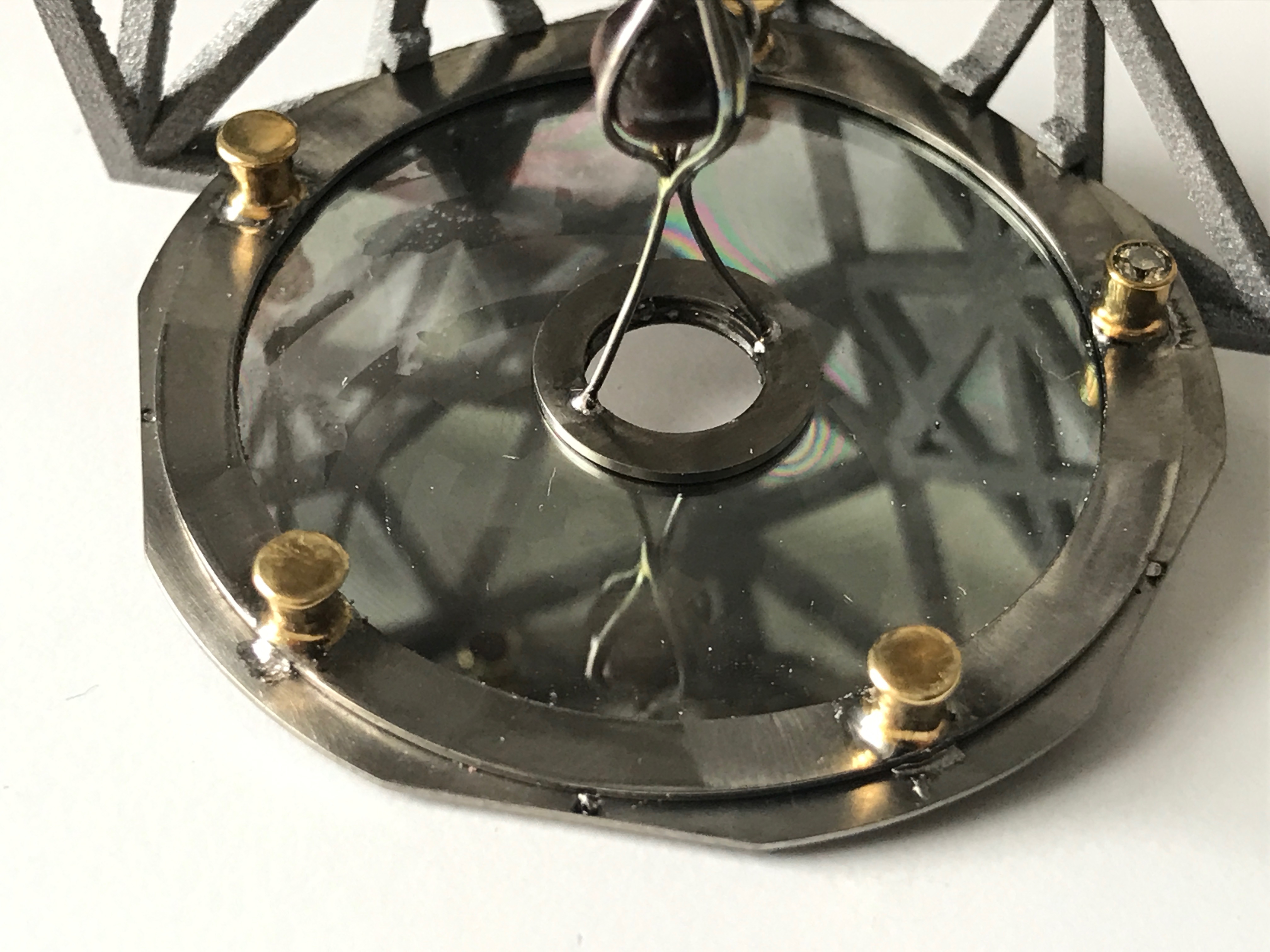 Sferics at the Point
by Andrew Kaiser

A menagerie of the electromagnetic sounds of the stratosphere recorded over the “Point” in Pittsburgh, the confluence of the Allegheny, Ohio, and Monongahela rivers.  3:48

From Paleolithic to Socialithic: this artwork is part of a collection of petroglyphs representing our contemporary age – the Socialithic – dominated by social networks, internet, smart phones, emoticons, meme, GIFs etc. All petroglyphs are a sort of sacred and symbolic representation of the impact of social networks on our culture: a mix of logos, icons, symbols, emoticons, drawings etc. depicting our faith in the social network religion. But is it real progress? Or the Socialithic is just a process of illiteracy and barbarization? This glyph created for the MoonArk represents a man talking with a smart phone: I had to simplify the original drawing to make it in nano scale, but now it really looks like primitive art. Dimensions of the footprint: 745,8 x 1414 nm Material: Silicon (100), monocrystalline, native oxide Dimensions of the silicon chip: 1 mm × 1 mm chip, diamond saw cut Technique: Focused Ion Beam lithography (FIB, Zeiss Auriga), Gallium ions are used to ablate the Silicon. Lab: the sample was proudly manufactured in the Center for Space Human Robotics, Istituto Italiano di Tecnologia (CSHR, IIT), Torino, People: Artist: Alessandro Scali. Principal Investigator: Dr. Alessandro Chiolerio; FIB operation: Dr. Katarzyna Bejtka; Substrate preparation: Dr. Denis Perrone; Substrate cutting: M.Sc. Simone Benetto. CSHR and χlab are coordinated by Prof. Candido Fabrizio Pirri.

The Center for PostNatural History chose to share a fragment of ear tissue from a specimen of genetically modified goat in our collection. The Biosteel™ goat, named Freckles, was engineered by the lab of Dr. Randy Lewis in Logan, Utah to produce spider silk proteins in its milk. Freckles is a Saanen breed of goat and is the product of thousands of years of domestication and co-evolution with human beings. The additions to her DNA also render her distinct from any goat that came before her.

Nano blood from SynZyme Technologies has four therapeutics – VACNO, SanFlow, VitalHeme, and VAXOL. This artificial blood at the nano-scale is 10,000 times smaller than red blood cells, thereby enhancing flow and promising significant benefit in traumatic brain injury, hemorrhagic shock, stroke, sickle cell disease, cancer and are currently undergoing clinical trials. SanFlow for blood transfusion no blood typing and refrigeration can be made available as an affordable and safe global substitute for blood transfusion as well as interplanetary travel. VACNO for cancer and stroke therapy and prevention of neurological diseases associated with aging. VACNO can be a nanomedicine for space travel for mankind!

Blue corn, also known as Hopi maize, is a variety of flint maize grown in the harsh climate of Mexico and the Southwestern United States. It was originally developed by the ancient Hopi through selective pollination and cultivation and contains 20% more protein and has a lower glycemic index than white corn. The rich blue/black/purple color of the corn has many symbolic meanings in Hopi tradition including the purple variety to reference “O’mi” or the direction of “above” and is associated with the Winter Solistice sunset.